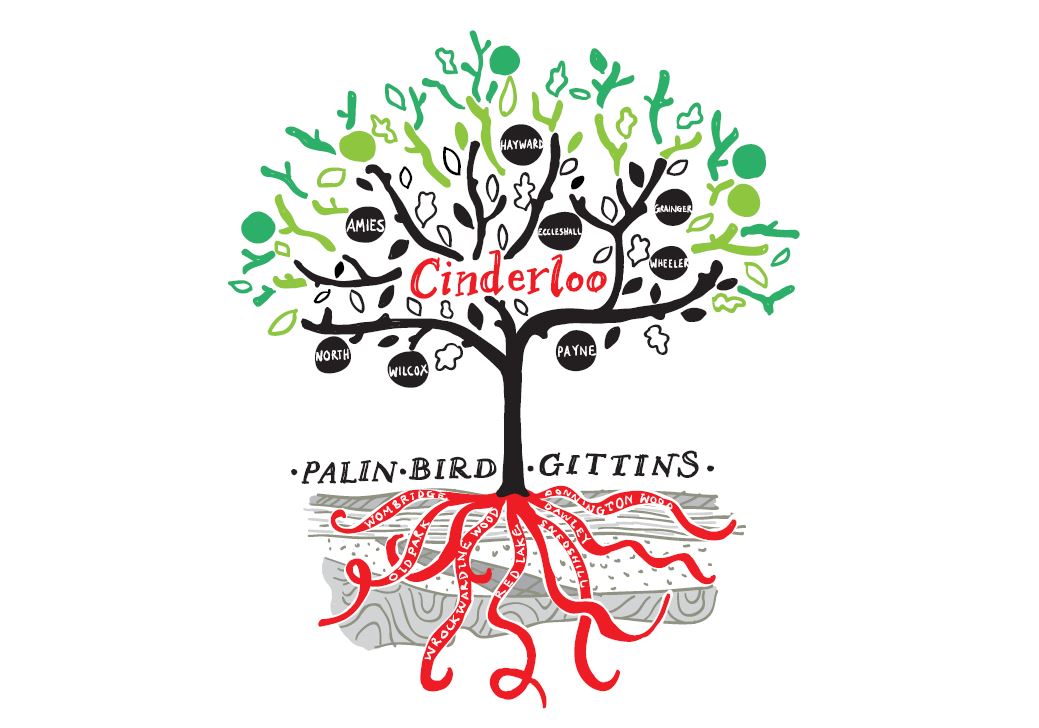 Tom the most active of the rioters, was the only person to be executed. Having escaped capture, he was found after he had a gunshot wound in his shoulder dressed by a surgeon the next day. He was buried in the parish of Shifnal, because he was living in Hollinswood, within that parish. However, he lived in Wrockwardine parish when he married Margaret Tunks or Tonks in 1819. She had several brothers, and two are mentioned as accomplices in the court proceedings. From the burial record and the newspaper reports, we know he was born around 1795, but as yet, no baptism record has appeared that links him to his proposed parents.

Using news reports that his grandfather Palin was alive and living at Lilleshall, while a maternal relative T Adderley was living in Madeley, and a lot of tree building for people with the same name, living at the same time in the same area, we have built a likely family tree. Sadly, Tom and Margaret had no children. His father was the son of a collier, and his brother was also a coal miner, so probably Tom was as well.

Various sources state different ages for William, varying from 18 to 21 years old; although he was baptised in 1803 he may have been born before that date. The BIRD family, mainly Miners and Charter Masters, lived in Coalpit Bank (aka The Bank/Ketley Bank); William’s parents died there shortly after his death; James in Mar 1832 & Elizabeth in Nov 1832, buried in Wombridge.

It appears William never married, nor had children, however his brother Phillip (1790-1845) & wife, Anne WOOLLEY (1797-1886), had 15 children, 7 of whom survived to adulthood, they had 37+ children and many grandchildren. Only 16 of Phillip & Anne’s grandchildren stayed locally, others moved to Worcestershire, Warwickshire, Staffordshire & USA; their occupations varied from Labourer, Miner, Road Surveyor, Clerk in Works to Sweet Shop Keeper.

Thomas, a miner, was one of the men who died during the Cinderloo riots. Thomas was the only son of James Ingle and Mary Gittins. Mary did have one other illegitimate child which maybe was James Ingle’s as well. Thomas was baptised as Thomas Ingle on the 3rd November 1788 in Wellington, the day before his parents were due to wed at St. Catherine’s Church, Eyton.

Why, you might ask, did these ceremonies take place at two different churches on two consecutive days?  Between 1787-1790 Wellington marriages were carried out at Eyton whilst the All Saints Church was being rebuilt. Thomas was probably born earlier than expected. These actually confirm his illegitimacy.  He should have taken his mother’s last name of Gittins, but the vicar christened him Thomas Ingle knowing that his parents were to be married the following day at Eyton. This may be why he would sometimes take his mother’s name, Gittins, explaining why the newspapers after his death at Old Park on 2 Feb 1821 named him as Thomas Gittins aka Ingle. It not believed he married, and he died aged 33. His abode was given as Lawley Bank – not far from where his death took place.

The Gittins of Dawley Magna:Download

Samuel was also sentenced to death. He was born about 1792 in Wombridge, probably on Coalpit Bank where his father Samuel died in 1828. He was shown as an Ironstone miner in the 1841 census. According to the old maps, Bank, or Coalpit Bank is now the area known as Ketley Bank. According to the trial testimony, he was with a friend at Potters Bank (the north side of the present Beverley Roundabout) most of the day of the riot but went to see what was happening at the cinder hills during the middle of the afternoon. So, it seems he was in the wrong place at the wrong time but was well known and easily identifiable. Maybe this is why the appeal for clemency from Shrewsbury citizens forwarded to Lord Sidmouth by the Mayor of Shrewsbury, Edward Cullis was accepted? On his reprieve, he remained in prison, but a second petition in February 1822 from 4 magistrates of Wellington resulted in a Free Pardon.

In 1823, he married Anne Lowe, born in Eyton upon the Weald Moors, at Eyton, and they returned to live at Coalpit Bank where their 5 children were born. He died in 1853.

Robert was born about 1775 to George & Mary Edwards, was the 6th of 8 children born over a 23-year period: 2 sisters and 5 brothers. At 46, he was the eldest of the 9 men arrested for their part in the Cinderloo riots and, unlike most of the men, had been working at one of the Donnington Wood pits as a miner. He married Eleanor Williams in 1798 at the Lilleshall parish church and they had four children in 10 years: Thomas b.1788, Ann b.1801, John b.1804 and Elizabeth b.1808. He died in Donnington Wood at the age of 55 and his wife, Eleanor died there in 1818 – both were buried in Lilleshall churchyard.

If you think you may be related to Robert Wheeler or for anyone interested in checking out the Wheeler family tree, please contact us at cinderloo1821@gmail.com to ask for access details and then follow this link to Tribal Pages.

This will give access to the tree but no changes can be made. Our researcher can accept enquiries about any of the information on there by email, especially if anyone finds an error, but we are not able to provide assistance to people researching their own family trees!

Joseph was born about 1792 in the parish of Lilleshall, probably at Wrockwardine Wood. His mother was Elizabeth Eccleshall, who does not appear to have married, although she had 4 children; her son Joseph stood witness at his brother Samuel’s marriage in February 1819 at Wrockwardine, while Samuel stood witness at Joseph’s marriage in October that same year. He was one of the miners arrested for rioting at the Cinder Hill and served a sentence of 9 months hard labour. He had 3 children (a fourth was possibly a fostered nephew, since his baptism names different parents and he was named as a lodger in the 1851 census).

He continued to work as an Ironstone miner living in Wrockwardine Wood until his death in 1847. His children lived in Wrockwardine Wood and The Nabb in later life, the eldest becoming a Primitive Methodist preacher, while the youngest died 1891 in a roof fall at the Muxton Bridge Colliery at Donnington owned by the Lilleshall company.

John was one of the older miners, born in Wellington parish around 1780. According to the places where his children were born, he lived in the areas of Red Lake, Trench and Cow Wood after his marriage to Bridget Ann Burns, an Irish lady, in Wellington in 1825. They had 4 daughters, but the twin daughters born at their house in Cow Wood in January of 1833 never knew their father, who died, aged about 50, in December 1832. She remarried in August 1834, to Francis Brown, at the church at Eyton upon the Weald Moors. Sadly, he died in July 1837, and she continued to live, first with her daughter Sarah in 1841, and then with her daughter Elizabeth and the latter’s husband, in Cow Wood, until her death around 1864-65.

John was born in Bangor on Dee, Flintshire, probably to Mary Edwards, who may later have married a man by the name of Payne (possibly Richard Peyn, at Liverpool in 1806), from whom John took his name.

At the time of the Cinderloo Riot he was living somewhere near Wrockwardine (Wood), because he married Sarah Hazeldine of Ketley Bank there in 1822, using the surname Edwards. However, their first five children were baptised in Wombridge under the surname Payne, while they were living at Old Park. Only two of them reached adulthood.

At some point between 1830 and 1833, the family left to work in Kingswinford, Staffordshire.

John and Sarah had another four children in the years between 1833 and 1844. He continued an Ironstone miner until his death in 1864 and all his surviving children and descendants used the surname Payne.

John was(bap.1792) at St Oswald, Brerton-cum-Smethwick, CHS to parents James AIMES, Groom & his wife Sophia (nee HAYNES?). In 1817 John married a local Dawley girl, Sarah DABBS (1797-1881) and they had 3 daughters and 6 sons. John worked as a Miner and in 1881 Sarah worked as a Midwife whilst living in Old Park, SAL with their 7 children who survived to adulthood.

In 1847, Thomas (1818), son of John & Sarah married his 2nd wife, Wombridge girl Catherine ROWLEY; they had 7 children before Thomas was killed in a pit accident at Old Park in 1859. One of Thomas & Catherine’s sons, Richard (1853-1919), married Margaret BARKER at Ardsley, WRY in 1883. Like Richard, Margaret’s father was killed in a pit accident. In 1866 Margaret’s father Andrew BARKER (1820-1866) and her brother Richard BARKER (1853-1866), along with other BARKER relatives, were killed in the Oaks Pit disaster, Barnsley, WRY. This explosion killed 361 men & boys and was the worst British Mining Accident until the Senghenydd Colliery Disaster claimed 439 lives in 1913.

Like other Cinderloo men, some of John & Sarah’s children and many of their grandchildren, moved to other mining areas up North and/or to the Midlands to work in the pits there.

In 1812 Christopher(bc.1790) married Dawley girl Meriah ANCRET, they had 7 children born in Lawley/Little Eyton. Their 2nd son Christopher (1823-1898), unlike his Collier/Miner forefathers, became a Grocer. Christopher(bc.1823) & his 2nd wife, Coalbrookdale girl Ann BIRD (1826-1892), had 7 Dawley born children; by 1881 all had moved away; Christopher died in Nottinghamshire & Ann died in Wolverhampton.

Many of Christopher NORTH’s descendants remained local and worked as Miners/Colliers/Charter Masters. Others moved up North or to the Midlands & Australia and many followed different occupations ranging from Ironworkers, Shop Keepers, Farmers to Sports Reporter.

John was imprisoned to hard labour for 9 months for his part in the disturbances on the 1st & 2nd February. He had been arrested for his role in the riots that took place across the region on the 1st February for the attack on machinery owned by the Lilleshall company at Donnington Wood.

It has been impossible to determine with any certainty which John Wilcox was the man who participated in the Cinderloo riots. 6 men who were born within the right time frame living locally were reduced to 2 likely candidates: one born in Wellington in 1789 to John & Phillis Wilcox née Thomas. It is believed he died in Ketley in 1869 The other born in Dawley in 1791 to John Wilcox and his wife Hannah née Ingle. Both were miners from mining families.  Each, at different times, had their names spelt differently (Wilcocks, Willcocks, Willcox, Willcock).

John Willcocks from Dawley and his believed twin Francis, were born in 1791. Their mother died soon after in April 1791. They weren’t christened though until 1st January 1792. John married Ann Baugh from Dawley at Wrockwardine Church in 1812. It is believed they were actually living in the mining community in Wrockwardine Wood at the time. They do not appear to have had children. After Ann’s death in the Dawley in 1816, John did not remarry, but was lodging in 1851 in Dawley Bank with the Bevan family, recorded as a ‘beggar collier’. By 1861, he was lodging with the Deakin family at Bush Fold, Dawley and was recorded as a pauper with no occupation. He died in Dawley in 1866. It is possible that his mother Hannah Ingle was the Aunt of Thomas Ingle who died at Cinderloo.

John Wilcox was baptised at All Saints Church, Wellington on 11th Oct 1789. His parents had 3 children, all boys in 7 years. John was the youngest. Like his brother Francis and his father Richard, who lived at Red Lake, he was a miner. He married Eleanor Parker at Wrockwardine Church in 1805 and they had 3 children, Richard, b1806, b Ann b1809 and died a month old & William b 1810. No record of his death can be found.

Thank you to our genealogists for their research